Paris is a world centre for gastronomy, and you’ll be spoiled for choice in good restaurants around the city.
French food and drink are famously delicious and don’t have to be expensive. If you’re excited by food, you’ll be in your element in Paris, where food is taken seriously (have you seen the film Ratatouille? ). If you’re not that interested in food or nervous about having to eat snails, fear not! Paris has all sorts of different eating establishments – and food shops to offer. For a start, one of the first places we saw, as we emerged from the Gare du Nord, was Subway. You’ll also (inevitably) find McDonald’s, and there’s also a Hard Rock Caf.
In addition to the local cuisine and American(-style) chains, there is a wide variety of nationalities’ food available in Paris, including Indian, Chinese, Vietnamese, Thai, Italian, Greek, Spanish, Mexican and a lot of North African, particularly Moroccan. You’ll find great places to eat and drink whatever your taste and budget.
Obviously, in a city of Paris’s size cuisine from all over the world is on offer but French food dominates menus throughout the city. Traditional French fare revolves around fine fresh ingredients served up in delicate sauces – the greatest element in French cuisine. The areas in the centre with the best choices include the streets north of the Louvre, especially around the Palais Royal and the Rue St-Honore, and the Marais. On the Rive Gauche, St-Germain-des-Pres has the chicest selection while the Latin Quarter boasts a good range. Bute aux Cailles (13e) has a predominance of food from the Southwest of France, while Rue de la Gaiete (14e) and Mouffetard (5e) are both good areas for traditional cuisine. 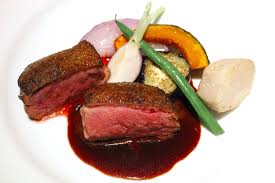 In particularly touristy areas like the Champs-Elysees, the area around the Centre Pompidou/Forum des Halles and the Latin Quarter you’ll find a plethora of cheap, basic restaurants offering bargain tourist menus. By French standards these places tend to serve mediocre to bad food, so try to avoid them – just a short walk away you should be able to find something more genuinely Parisian.
Paris restaurants will take orders at lunchtime between 12h00 and 14h00, and in the evening between 19h00 and 22h30. Bistros, brasseries and cafes, which most often serve simpler food than restaurants but offer a lot of traditional French dishes, often have longer opening hours. Always book ahead for good restaurants at weekends and note that many places are closed Sunday evening and Monday.
Paris’s numerous cafe-bars define the city. It is in the city’s cafes that coteries of great Parisian thinkers such as Derrida and Sartre formed their philosophies in conversation and camaraderie – Victor Hugo being moved to write that “loafing” in the city’s cafes was an essential characteristic of being a Parisian.
Even today it is in the cafes that modern-day Parisians relax, do business and fall in and out of love – this is one of the world’s most romantic cities after all. From the smokiest drinking den to the finest pavement cafe and through to the ultra-modern bar, cafe-bars are integral to any experience of Paris. In your Food tour paris you may be able to find that French do not like their meat to be cooked so well. It is always available in half cooked form.
Thanks to this amazing company who has done show much to support their community and the people they partner with.  We appreciate your support Janitorial commercial cleaners!